Unfortunately I currently have no way of documenting the controls for this version. :(


The analog stick and the Left/Right D-Pad buttons are not used.


This version has a surprising amount of customization options regarding the throttle and brake buttons.


There are also more controller types for those not using the keyboard:

You'll probably have to experiment a bit with the controls. On a joypad or joystick, up and down control the throttle and left and right control the brakes, sort of like the Keyboard A layout. 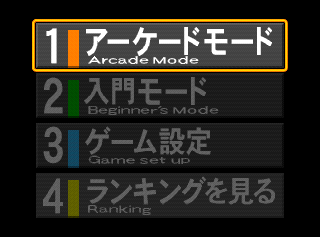 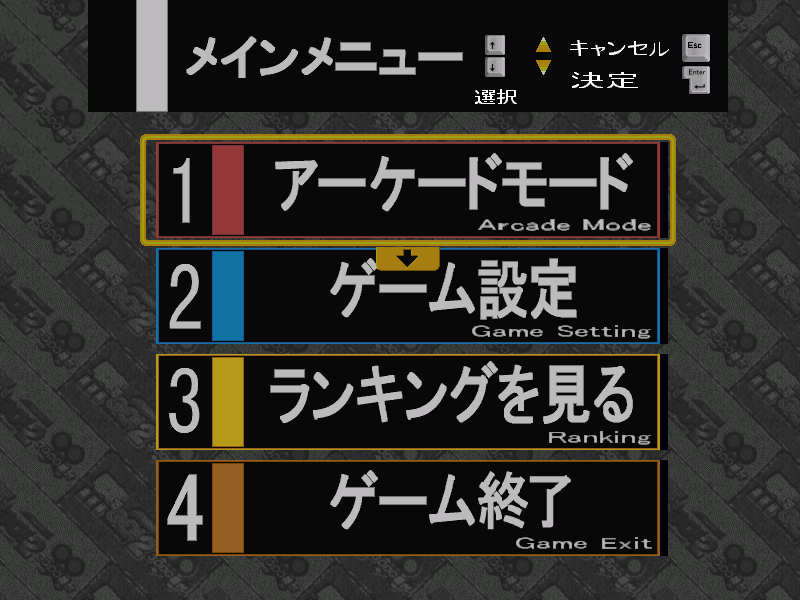 The options are as follows: 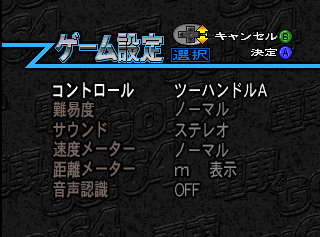 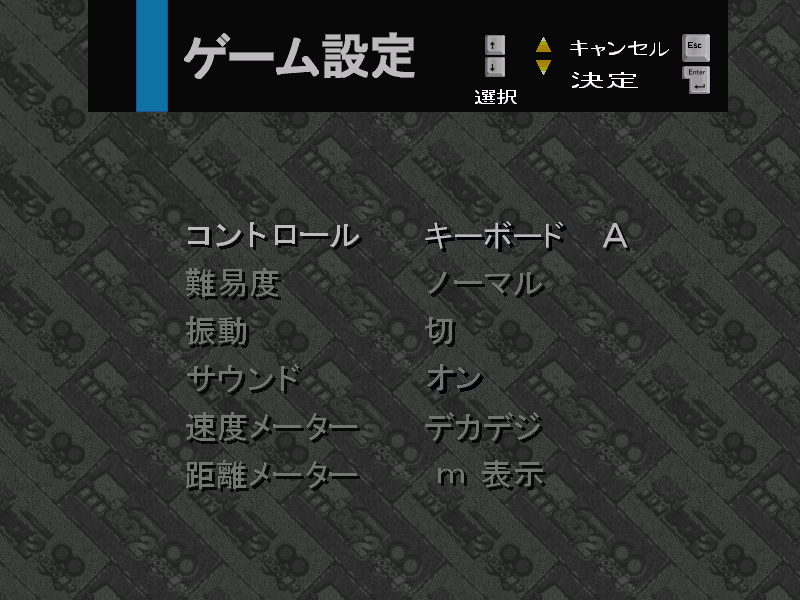 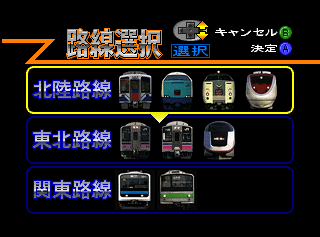 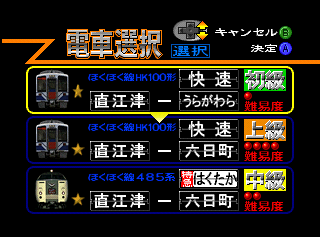 Once in the Arcade Mode, you'll go to the Region Select screen. Once you select a region, you'll be able to select one of the stages located in that region. Details on each region/stage are here. 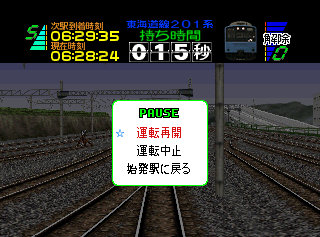 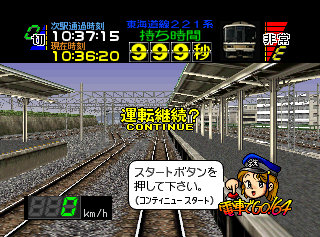 These are simple screens, but it's worth mentioning them anyway. If you get a continue, you have the option of continuing by pressing START or ENTER (depending on the platform), other buttons will speed up the counter. The pause screen is similarly simple, these are the options it displays:

If you select to quit or restart, the game will ask something like "Are you sure?". The first option (はい) is "Yes" and the second option (いいえ) is "No".

The game official refers to them as seconds, but that can get confusing so I'll call them points. You start with a certain amount of them and win (or lose) some while you're playing a stage. If you run out of points, you lose the stage and will have to either use a continue or give up. Lose all your continues and it's game over. Each continue will put you at the last station that you stopped at. This is helpful for most stages, but if you happen to get a continue before stopping at any station, it's better to just quit the stage and start over again.

Once you complete a stage, the game will award you a star based on how well you did (bronze, silver or gold). If you happen to lose all your points right when you're about to stop at the last station, you are forced out of the stage and won't get a star, so beware. Each stage has its own difficulty meter (1 to 5), which is how difficult that stage is to complete naturally, but the game also has its own difficulty meter ranging from Easy to Very Hard. This will affect how many points you start a stage with, and how many points you win/lose throughout that stage. 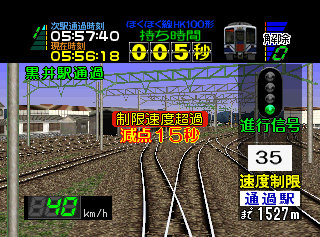 The things that will make you lose points are:

The things that will give you points are:

I must tell you right now that this game is not fair. On more difficult stages, it'll be happy to penalize you as much as possible while it'll only give you a few bonus points every now and then (if at all).

The Good, the Great and the Excellent (and Teitsū) 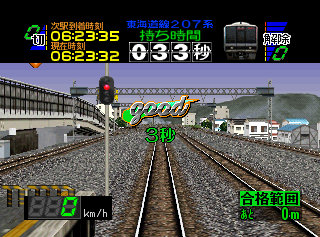 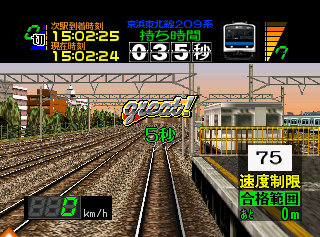 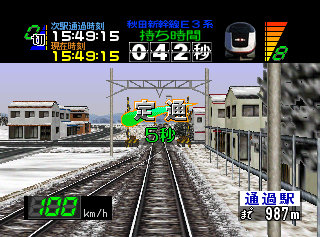 You can get bonus points if you stop the train correctly at a station! If you manage to stop at 0m, you'll receive a Good on the station and when you manage to do both that and stop within 2 seconds of the arrival time, you'll receive a Great which is usually worth 2 points more than a Good. The amount of points a Good is worth depends on the difficulty setting (ex. on normal difficulty it can be worth 1 to 5 points). If you manage to stop at 0cm from the station, you'll get an Excellent and receive a total of 10 bonus points. Note that this is incredibly difficult to pull off. You'll know you've done it when you hear birds chirping after you stop at the station (or as I like to call it, the ambience sounds from Mario Golf).

Warning: If you receive any penalty normally deducted once you stop at the station, such as accelerating or using the emergency brakes while near the station, you will not get any of the previously mentioned bonuses.

In pass-through stations, you'll need to pass by them at exactly the scheduled time to earn points. Passing by the station at the exact second will grant you a Teitsū worth the same amount of points as a Great. All of these bonuses (with the exception of an Excellent) increase by 1 point for every consecutive time you are able to get them.

Fun fact: 定通 or Teitsū is a very uncommon word, chances are you won't find it in most dictionaries! It means "when a train passes through a passing station in the scheduled time". 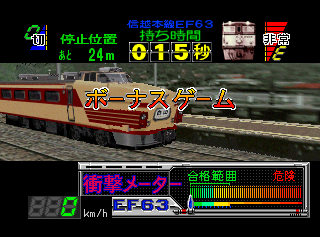 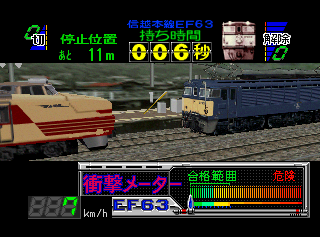 The main bonus game is a simple one that appears at fixed points on each stage. You have 15 seconds to connect the EF63 series with the 485 train. You're allowed any speed and any brakes (including emergency brakes). You want to be slow when connecting the trains, any higher than 7 km/h and it's likely that you won't get any points. The slower you are the higher amount of points you get. At 0 km/h (while the train is still moving) you get can up to 10 points.

A good strategy is to accelerate to about 15 or 16 km/h and then slow down immediatelly using the emergency brakes. If you end up stopping, accelerate very slowly by throttling the train to 1 and then back to 0 again. You don't have much time to screw up, so be careful.

Not to be confused with the stages you unlock once you have all gold stars, those are here. 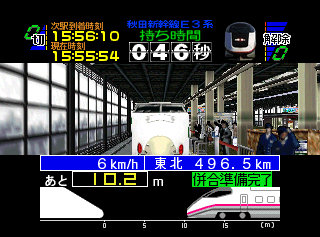 At the E3 bonus game, you'll have 60 seconds (plenty of time) to connect the E3 series with either the E2 or the 200 series in front of it. In order to play this you'll need to stop at the Morioka Station while using a E3 train and get a Good or a Great. In this bonus game, the speed is displayed in a blue box with the distance meter just below it (it only starts appearing when you're at least 17m close to the train). You'll get a graph of sorts in the bottom of the screen too in order to help.

To succeed you have to connect both trains at exactly 1 km/h. You might get lucky if you just barely exceed or slow down from 1 km/h but it's very risky. Above 1 km/h the E3 train slams too forcefully onto the other train, and less than that speed the connection between both trains is too weak. A good strategy is to accelerate to about 10 km/h and slow down once the distance meter appears on-screen, trying to stop about 1m to 2m before the train. Then accelerate very slowly by tapping the button to increase the throttle and immediatelly pressing the one to decrease it, you'll find the train accelerating slowly bit by bit, do this until you're closer to the train and try to aim for 1 km/h. If you're willing to risk it, you can also go up to 15 km/h and as soon as the distance meters appear use the button to enable the emergency breaks (no penalty).

While playing on the E3 stage from Akita to Shin-Hanamaki, completing this bonus game will make you play the ATC Bonus Round.