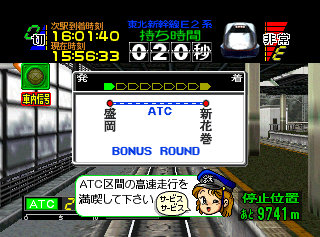 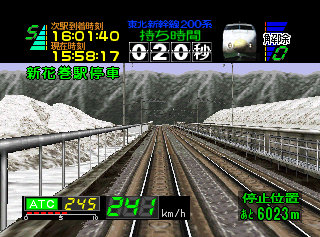 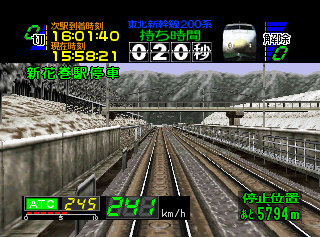 The ATC bonus round is a neat high-speed section of the Tōhoku Shinkansen that you get to play on the bonus Tōhoku Region and the Akita to Shin-Hanamaki E3 stage.

ATC works a little differently than ATS. The limit is displayed on the bottom-left corner of the screen, and you'll get an instant game over if you pass the limit. Remember this is a bonus round and will not affect the star you'll receive on the Akita to Shin-Hanamaki stage.

When a limit increases, you'll only hear a single beep which means you can now go up to that speed. When a limit decreases, you'll hear a beep warning you of the incoming limit and after a bit another beep meaning the limit is in place. When you hear the first beep indicating an incoming limit, immediatelly enable 8 brakes. The general rule is to stay 10 km/h under the limit (or only 5 km/h under if you've got quick reflexes). The limits are as follows:

The last limit is specially strict, so be careful. 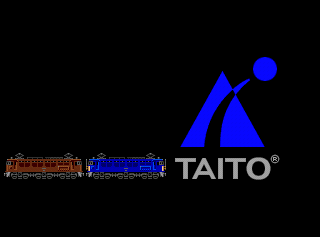 Something you might not know about the Taito screen is that, the color of the train that is on the title screen reflects the difficulty level currently selected.

Also, on the N64 version only, different trains can appear during the intro. They can be the E3 Shinkansen, the 200 Shinkansen, the E2' Shinkansen or the E3 attached to any of the other ones.

Sometimes while playing through the N64 version...this happens. The game will mess with the pitch of the train horn and, more amusingly, of all the voices as well (though not both at the same time). The train's engine sound will disappear as well. I'm not sure what causes it exactly, I've made it happen twice so far, but I only recorded it this time.